The debate on scaling is not specific to a single blockchain and has come up on multiple occasions regarding Bitcoin in the past. Right now, however, the debate focuses mostly on Ethereum, its upcoming merge and relatively new layer 2 solutions – which we’ll concentrate on in this article.

Given the number of people using Ethereum, and the corresponding increase in transactions and dApp interactions, the blockchain has reached certain capacity limitations, at around 10-20 transactions per second (or TPS). In comparison, the Visa network processes around 1,700 transactions per second, with a claimed theoretical capacity of up to 24,000 TPS (link). Given its limitations, transactions on Ethereum are in competition to get included in a block. Increased demand then increases prices for the execution of transactions (referred to as ‘gas fees’). Figure 1 shows Ether price (in grey) and average transaction fees (in blue). At its peaks, average fees for a single transaction were as high as $40. Such fees are simply not viable and broader adoption of the Ethereum blockchain requires increased transaction throughput, lower fees, and faster transaction speeds. 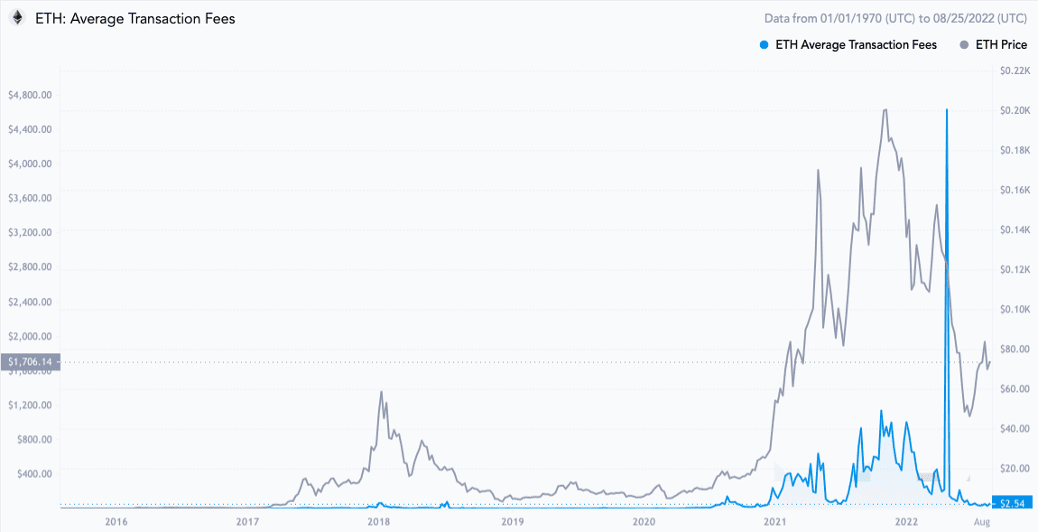 The main reason for Ethereum to have this low transaction speed and throughput is its focus on decentralization and security. Ethereum co-founder Vitalik Buterin famously described the “scalability trilemma” (see Figure 2): how usually there’s a tradeoff between decentralization, security, and scalability. He then goes on to describe “sharding” (which we’ll look at below) as the solution to this problem at the blockchain level (link). In addition to scaling the Ethereum blockchain itself, it’s also possible to decrease the number of transactions on the chain, either by bundling them together or by executing them on a separate blockchain altogether. The aim these techniques have in common is raising the system’s ability to handle an exponential increase in usage, without sacrificing functionality – that is, increase transaction throughput and speed, to reduce transaction fees, while keeping and relying on the security guarantees and decentralization of the base layer (Ethereum). 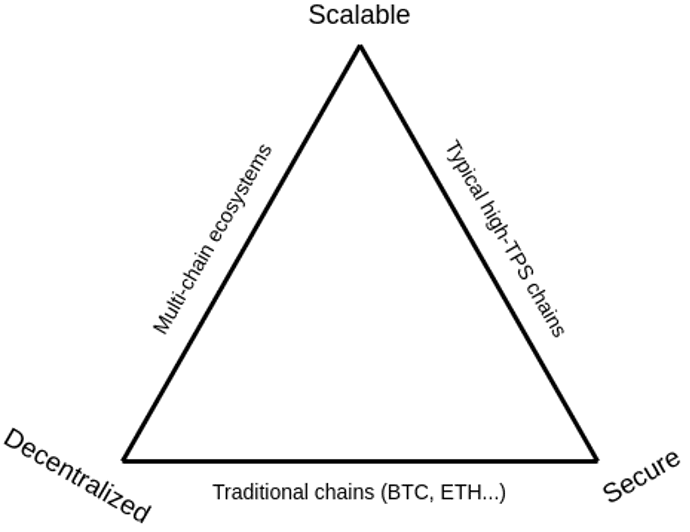 Increasing block size: the most straightforward way to scale any blockchain is simply increasing the permitted block size. Currently, Ethereum limits the data per block to 1MB (this is on average: for the precise mechanism refer to EIP-1559). This limit is set low on purpose, since it allows almost any computer to participate in the network as a full node, and thus improves decentralization. Increasing the block size would allow miners to include more transactions, and in turn (linearly) increase the transaction throughput of the blockchain. At the same time however, such an increase would impact decentralization, because as block size grows, the chain’s size increases and faster bandwidth is required to run a full node. In the extreme case, only specialized supercomputers could manage to run a full node. For this reason, the Ethereum community has ruled out larger block sizes as a scaling solution. It’s interesting to note that similar discussions have regularly arisen in the Bitcoin community, even leading to forks such as Bitcoin Cash and Bitcoin SV (link).

Sharding: in essence, this refers to increasing scalability by introducing parallel execution of transactions in place of sequential execution on a single chain (the way Ethereum currently operates – see link). This is achieved by dividing the chain into smaller chains (or ‘shards’). On each shard, a set of collators is responsible for approving sets of transactions concurrently, which are subsequently added to the main chain. This mechanism can significantly increase the TPS without sacrificing on decentralization or security. Figure 3 provides an overview of sharding – more detail can be found in Vitalik’s blog (link).

Most layer 2 solutions rely on nodes (with varying terminology, such as ‘validator’ and ‘sequencer’) that collect the associated transactions, instead of submitting them directly to layer 1 (i.e. Ethereum Mainnet). These transactions are then settled off-chain, or batched together into groups before anchoring them on layer 1, making them non-alterable. There are many implementations of this, each with their own pros and cons, and optimal use cases. They all have in common, however, increasing transaction throughput and reducing network congestion on Mainnet – resulting in a more accessible Ethereum.

Rollups: rollup-based layer 2 solutions move transaction execution outside of layer 1 and combine, or ‘roll up’, several executed transactions into a batch. These batches can consist of hundreds of transactions, and related transaction data is then sent back to Mainnet. This substantially increases transaction throughput, while validity checks and anchoring to layer 1 guarantee security. In addition, rollups usually feature fast transaction confirmations, as they don’t need full inclusion on layer 1 for sufficient finality.

There are two main categories of rollups, which differ on how transactions are computed and anchored to Ethereum:

Plasma: this scaling works through a concept of ‘child chains’ – separate blockchains anchored to the Ethereum Mainnet by a smart contract, in turn locking-up Ether. They are then built on fraud-proofs, a concept similar to the optimistic rollups covered earlier. However, the main difference is that the separate blockchain uses its own mechanism for block validation, and subsequently publishes cryptographic proofs for each block (think of small proofs that can be used to verify information about the included transactions) on the Ethereum Mainnet, to gain security. There are some limitations however, as data availability is kept off-chain – which is different to the concept of rollups.

Plasma was one of the first concepts for layer 2 scaling, but it has not gained the traction of other solutions. One example project is Gluon Network (link).

Validium: like Plasma, this pairs optimistic rollups with off-chain data availability. Validium can be described as using validity proofs like ZK-rollups, paired with off-chain data availability (instead of publishing everything on-chain). Again, this involves some tradeoffs, due to the reliance on external data providers, but it also leads to higher transaction throughput.

Examples for Validium-based scaling solutions are Immutable X (link) and, again, StarkWare (link) which can operate in the forms of ZK-rollup and Validium.

Sidechains: not a layer 2 solution in the strict sense, sidechains are independent blockchains using their own consensus mechanism, block parameters and incentives, while remaining Ethereum Virtual Machine (EVM)-compatible (“in order to support smart contracts”). Therefore, these chains can interact with Ethereum Mainnet and rely on cross-chain bridges to transfer assets between chains. The biggest difference to layer 2 solutions is that sidechains don’t enjoy any security assurances from Ethereum.

Why layer 2 scaling solutions are needed

Having discussed several ways to scale Ethereum, let’s recap why we need them. As outlined in the introduction, the layer 1 blockchain has limited capacity and any increase in block size would potentially reduce decentralization. Introducing layer 2 scaling makes it possible to offload transactions from the main chain, while profiting from the underlying chain’s security guarantees. Ultimately, this results in:

We saw there are countless projects working on scalability – an advantage, as it all helps reduce congestion – and multiple approaches prevent single points of failure. In addition, this allows for tailored, application-specific solutions which can be used for different types of project.