Collectible and generative art in the NFT space have some differing attributes.

Collectibles, often referred to as PFPs (“profile picture”) are generally large collections, commonly of around 10,000 NFTs. Each NFT in the collection has a unique set of traits of varying rarity (e.g. hat, cigarette, laser-beam eyes, alien, etc.) and so forms a unique variation of a single figure. Many of the highest-priced NFT sales are from collectibles.

In contrast to fine art NFTs, collectibles are often issued and run by a team of people instead of a single artist, and can double as membership cards, granting access to events, websites, investment research, future NFT drops, and even voting rights on future strategy. In addition, in some cases there are wide-ranging licensing rights involved, allowing owners to use their NFTs commercially (for example, Adidas’ Into the Metaverse campaign featuring Indigo Herz, their Bored Ape – link). NFT teams and their owners have turned some collectibles into large, global brands.

Technically, collectibles are forms of generative art, as described in more detail below, because they are made by a randomizing algorithm. However, as they have other utility and are generally not as sophisticated, people usually do make a distinction and do not see them purely as ‘art’.

Generative art is, in essence, created from a combined effort by an artist and an autonomous system. Usually, it’s based on the artist’s code but includes a source of randomness for production of colors, patterns, and shapes. Therefore, in many cases the artwork is created autonomously, based on an initial set of instructions from the artist. As the artwork is only influenced by the artist, but generated by the underlying computer program, the outcomes of the original artwork cannot be fully predicted until the process is complete.

In many cases, there are three key elements to generative art: randomness, algorithms, and geometry. These enable amazing results with beautiful visual effects, while not being pre-defined by the artist.

History of generative art and its combination with blockchain

Generative art existed since long before blockchain, and is not exclusive to it either – but their combination introduced new possibilities and popularity. The beginnings of generative art trace back to the 1960s, with computer art pioneers like Georg Nees, Vera Molnàr, Harold Cohen, and Charles Csuri, experimenting with early mechanistic technologies to create autonomous art-making systems.

By combining generative artworks with a blockchain, they gain a new layer of complexity – they can receive specific inputs at the time of the mint and reside, immutable, as live code on-chain. So users can view the live image of the piece – not just a PNG image stored on a server or on IPFS, but a string of code that generates the image on request. See link for an example. 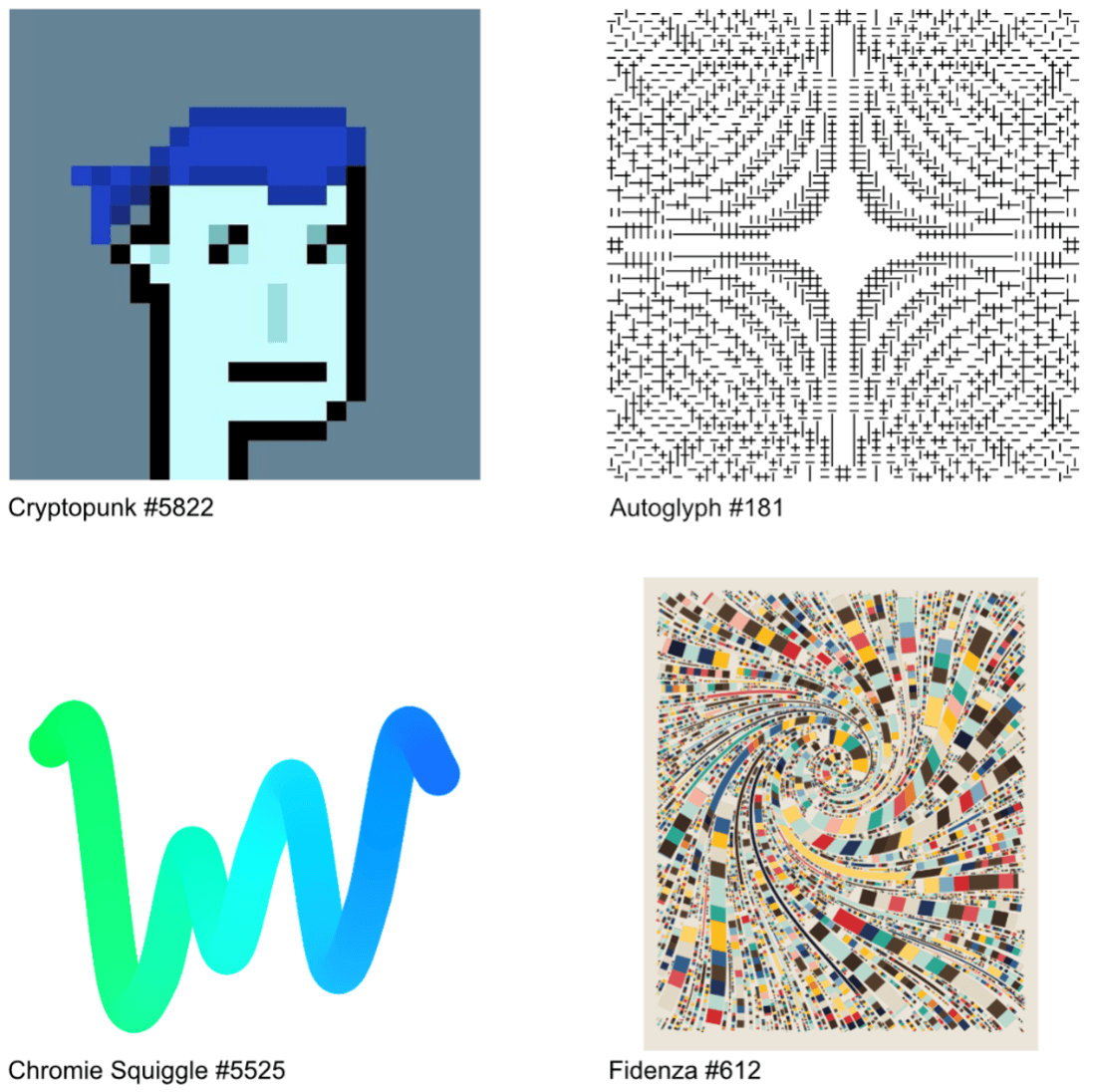 Implications for artists and the art market

NFTs provide artists a new opportunity to earn a living, even a financially lucrative one. They can earn two types of fee with NFTs: 1. proceeds from primary sales, and 2. royalties from secondary sales. Take Tyler Hobbs and his Fidenza artwork as an example. Typically, an artist is not well known at the beginning of their career, thus each Fidenza was initially minted at a price of only ETH 0.17 ($400 at the time). But due to the collection size (999 pieces), this generated ETH 169.83 ($400,000) in primary sales for the artist. However, today the floor price of the collection (i.e. cheapest offering price) is ETH 96.00 ($130,000) for a single item. Since the collection was launched in June 2021, it has generated a total of ETH 52,000 in sales. Tyler Hobbs also set a secondary royalty fee at 7.5%, allowing him to benefit from appreciation in the price of his works – resulting in revenue of ETH 3.9k ($5.3m at the time of writing).

NFTs break the existing conventions of the art market. They make art accessible to everyone (although not always financially accessible) and sale prices are anchored on the blockchain, increasing transparency and laying the foundation for a dynamic market. This creates more demand in a marketplace than a traditional auction house does. For example, OpenSea, the largest NFT marketplace, facilitated $14 billion in sales volume in 2021. In comparison, the two largest auction houses, Sotheby's and Christie's, had combined sales of $14.4 billion in the same year. Naturally, any collection of collectible or generative art may contain rarer pieces for which pricing is more challenging, and where traditional auctions may be more appropriate. Hence, Christie's and Sotheby's, for example, achieved NFT sales of $150 million and $100 million, respectively, in 2021. Although NFT prices and sales volumes dropped significantly in 2022, auction houses are positioning themselves for the next upswing – for example launching their own NFT marketplaces, as Christie's did with Christie's 3.0 in late September 2022. Current market dynamics show that conventional auction houses and newer NFT marketplaces complement each other – most importantly, both have an incentive for NFT art to be respected in the art market as the total market grows. Overall, the NFT art market delivers a win-win for artists, collectors, marketplaces, and auction houses.