The market conditions over the last couple of months have become a valuable test of the real stability of stablecoins. The current market capitalization of stablecoins is $172b. Most of the stablecoins are pegged to the US dollar, meaning they aim to be worth 1.00 USD all the time.

Concerns over the reliance and structural soundness of Tether (USDT) may have been picked up by the markets, given its stablecoin market share declined from 80% to 50%. (USDT is theoretically backed up by a dollar-based reserve in which every USDT is backed by 1 USD.)

DAI is the most popular decentralized stablecoin, with a market cap of $9.6b. It relies on over-collateralization: every 1 DAI is backed by at least 1.5 USD of Ethereum. When this ratio cannot be maintained, the position is liquidated. Most often positions are collateralized with a 2:1 ratio to avoid being liquidated when the price of Ethereum drops. While DAI has proven reliable over time, this has come at the cost of not being capital efficient. MakerDAO, the protocol behind DAI, had an annualized revenue of $97m over the past year.

The former, like Liquity, launched in April 2021. With a current market cap of $760m, Liquity allows users to mint LUSD at a 1:1.1 ratio. The latter, so-called algorithmic stablecoins, come in a wide variety of forms. For example, FRAX, $2.6b market cap, uses a fractional reserve to damp price crashes when the market is contracting, offering 1:1 redeemability. Another example, FEI, with a $422m market cap, has a protocol that owns the assets that users deposit into the system, not the individual LPs of the vault’s collateral. FEI is not a loan against collateral so much as it’s effectively a sale of collateral assets in exchange for a stablecoin.

#Layer 2s, rollup, and other scalability solutions for Ethereum

Ethereum has, over the last month, seen $1.2b in transaction fees paid . Its high fees and high latency are some of the biggest criticisms about it. Scalability solutions aim to solve this by executing the transactions on a parallel chain or off-chain, thus reducing the amount of slow, expensive computation for Ethereum.

Through 2021 there were two main trends within scalability solutions: optimistic rollups, like Matic (now known as Polygon), and zero-knowledge (ZK) rollups. Vitalik Buterin, creator of Ethereum, stated: “In general, my view is that in the short term, optimistic rollups are likely to win out for general-purpose EVM computation and ZK rollups are likely to win out for simple payments, exchange, and other application-specific use cases, but in the medium to long term ZK rollups will win out in all use cases as ZK-SNARK technology improves.”

zkSync aims to tackle the high gas fees, offering 1/100th of the cost for token transfers, 1/30th for ETH transfers, and potentially allowing Ethereum to reach 20,000+ transactions per second (TPS). zkSync recently received $200m worth of funding. For a video explaining zero-knowledge proofs, from basic to advanced level, click here.

The high cost inherent to the Ethereum chain has been a catalyst for competitors to emerge. These so-called Ethereum killers aim to solve the scalability issues of Ethereum, while attracting both users and developers into their own ecosystems.

Solana is a good example. Conceived as a general-purpose chain, it has achieved a remarkably high TPS of around 20,000 to 30,000, while Ethereum has only around 12 to 15 TPS. Solana has managed to attract capital and locked $15b into its ecosystem. Nonetheless, it is important to remark that Solana has suffered from several network outages in the last 6 months.

Currently, it is highly troublesome to bring a token from chain A to chain B. This has sparked demand in the market for bridges between chains. Both chains and bridges have a symbiotic relationship: bridges need those different chains so there’s something to bridge, and chains need bridges so as to transfer assets.

Without a doubt, this has been one of the hottest trends of 2021. The biggest marketplace, OpenSea, went from $1b to $10b trading volume in just three months. Competition for the preferred marketplace has started, with the launch of LooksRare on 11 January – a truly decentralized NFT exchange that has seen $9b+ in trading volume and $210m+ in protocol earnings within its first 20 days. Large, popular brands have joined in, such as Nike buying a virtual shoe company , and the Adidas / Prada collaboration to launch an NFT. Another industry that could see disruption is music. Music NFTs are fixed quantity, tokenized audio files, where the main trait is the audio itself – that is a .mp3 or .wav file. It's like buying a track on iTunes, except now you have a limited copy you can resell. There are already platforms that allow artists to add copyright to their music through an NFT, such as Royal and Opoulous. Agencies, labels, events, fan clubs, and collectors have already been established. There are also streaming platforms such as Audius and Emanate, seeking to become the next Spotify or Soundcloud.

Beyond art and collectibles, NFTs are a critical part of the puzzle in the play-to-earn gaming model, in which players can own a digital representation of an in-game object. Over the past year, games like Decentraland and Axie Infinity have demonstrated the potential value offered by tradable and sellable NFTs, allowing players to enjoy versatile ownership of their assets and state within the game.

Decentralized autonomous organizations are social vehicles that can be created for a wide array of uses. We’ve seen DAOs that focus on collecting NFTs (like PleasrDAO), on crowdfunding capital (ConstitutionDAO, which raised $47m worth of ETH to bid to purchase one of 13 copies of the US Constitution) and to tackle social or environmental causes like climate change (KlimaDAO). In addition, many crypto protocols are governed by a DAO.

But why are DAOs a thing? And how can they be the future of work? Forty five years ago, the economists Jensen and Meckling wrote: “It is important to recognize that most organizations are simply legal fictions which serve as a nexus for a set of contracting relationships among individuals.” The nexus comprises corporations, LLCs, non-profits, and the government, all coordinating the activities of both individuals and groups according to contractual terms.

In a world where every network has a token and tokens are earned for participating in networks, plus the ability to purchase tokens is permissionless, then every person becomes an investor. Not every investment will appreciate, but individuals will have access to opportunities that were previously reserved for a select few – and a whole new class of income-earning opportunities will be unlocked for them.

#Developers who come to crypto, stay in crypto

The core contributors of protocols are most often developers, who play a critical role in any IT infrastructure. When referring to blockchain or decentralized finance, they are responsible for creating (i.e. coding) all the different applications, the audits, and generally making sure that everything works as expected.

Nonetheless, while the growth of developers in web3 has been record-breaking it still represents a small percentage of software engineers globally. We are still in the early innings of web3, and fewer than 1,000 full-time developers are responsible for over $100 billion in total value locked in smart contracts.

Ethereum remains the champion among the different crypto ecosystems, with 4,000 active developers. Polkadot, Cosmos, Solana, and Bitcoin are the next largest ecosystems. 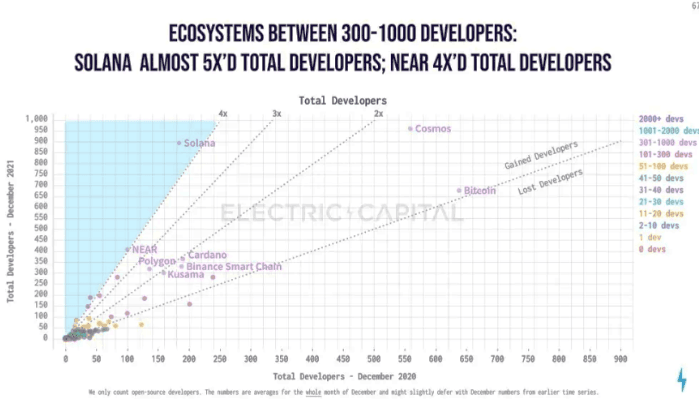 And yet the growth in developers and the overall ecosystem goes beyond what is shown in the report. Two trends are not captured in it. First, senior developers and directors from FAANG companies quitting and moving over to web3 – for example Ryan Wyatt, Senior Director at YouTube who is now CEO at Polygon Studios . Second, those same companies and big brands like Adidas and Nike getting involved with web3 and the Metaverse. Nike now has a Director of Metaverse Engineering , Google is hiring blockchain specialists to bid into ‘decentralization’ , Youtube’s CEO wants to help creators capitalize on emerging technologies , and Apple’s CEO has said they see a lot of potential in the metaverse and are investing accordingly .

#Regulators are on the way

On the 26th of January, the SEC proposed an amendment to what can be defined as an “exchange”. It encompasses a radical paradigm shift that was not contemplated in the SEC’s previous related concept release and would overrule previous no-action guidance.

It does not make express reference to blockchain, DeFi, automatic market-making (AMM) protocols, etc., but the SEC staff could likely use its expanded definition of securities “exchange” to bolster the SEC’s arguments that AMMs constitute securities exchanges. Under the vaguely defined amendment, a block explorer - comparable to google for a blockchain - might be considered a securities exchange because it could be argued to constitute a communications protocol through which buyers and sellers can interact with smart contracts to communicate trading interest resulting in a trade.

This new rule could be stretched and used to close popular internet discussion channels, like Reddit, Twitter, or any other platform. If one discussion on an online platform results in two parties negotiating the sale of a security, is the platform now a securities exchange or punishable for failing to register as a securities exchange? This incredibly broad rule opens up huge prosecutorial discretion for the SEC.

There are additional important regulatory milestones in 2022. The ongoing case of SEC against Ripple (XRP) which started in December 2020, could see its end in April 2022. To read more about the case click here.

In addition, recent developments in DeFi will be used as arguments by regulators to enact a stricter regulation of the ecosystem. The CFO of Wonderland, known as 0xSifu, had access to $800m in the treasury. The real identity of 0xSifu is Michael Patryn, who was formerly known as Omar Dhanani when he was found guilty of burglary, ID theft and credit fraud. Additionally, Michael Patryn was a co-founder at QuadrigaCX, a Canadian exchange that collapsed in 2019 after the CEO died in India, in which $190m went missing. For some media coverage of the case, read this article.